Two second half goals from Ben Knight and Cole Palmer were enough for City U18s to claim three points over Wolves at the City Football Academy.

City started the U18s Premier League tie on the front foot, mainly with Sam Edozie bolting down the left flank.

Knight’s effort within the first five minutes required a near post save from 'keeper Joe Young, who was almost beaten by Finely Burns 20 minutes later when his headed effort from a corner rattled the crossbar.

Wolves fought back however, and just before the break, striker Theo Corbeanu headed towards the front post from close range. Our shot-stopper Cieran Slicker was there to claw the effort to safety, and matters stayed level going into half time.

The deadlock was broken in the 62nd minute. Knight found himself in space within the box, and his first-time effort was palmed onto the crossbar before landing in the back of the net. 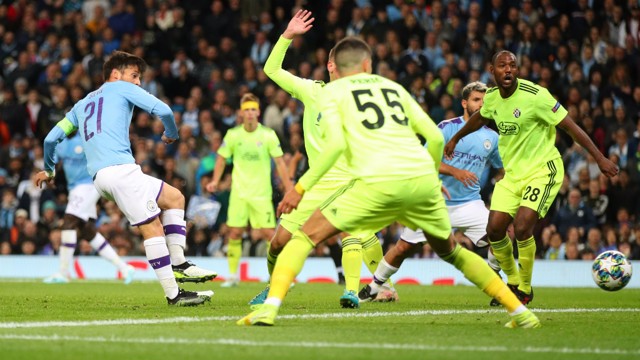 Spirits were high and shortly after, captain Palmer dribbled his way through the Wolves’ defence until he was brought down inside the area. Our number 10 stepped up to take the penalty and sent the 'keeper the wrong way, slotting the ball into the bottom left to make it 2-0.

City’s defence remained tight for the remainder of the match and proceeded to keep Wolves’ numerous attacks at bay.

Meanwhile, substitutes Charlie McNeill and D’Margio Wright-Phillips almost helped guide a third and final goal with some positive forward play, but two would be enough for the victory.

How we lined up

Slicker started in goal with Kwaku Oduroh, Burns, Luke Mbete-Tabu and Oscar Tarensi making up the back four.

We sit at the top of the Premier League Under 18 table with 18 points, after winning six games out of seven.

Gareth Taylor and his squad next play in the U18 Premier League on Friday 18 October away at Stoke, once the international break is over.

Manchester City started our defence of the U18 Premier League Cup in style with a dominant 4-1 victory over Southampton at the City Football Academy.

Match report from our game against Southampton in the U18 Premier League Cup...

City’s Under 18s set out on the defence of our Premier League Under-18 Cup crown at home to Southampton on Saturday seeking to build on what manager Gareth Taylor terms an ‘amazing’ start to the new season.