Having been born in the shadow of Manchester City’s original Gorton home, it’s somehow fitting that John Thaw went on to enjoy worldwide fame playing two of Britain’s most iconic boys in Blue.

Abandoned by his mother at an early age and brought up by his father, John overcame a tough, impoverished upbringing in inner-city Manchester, to become one of Britain’s most talented and treasured actors, carving out a stellar career on TV, film and stage.

First as the hard-bitten, cynical DI Jack Regan in The Sweeney – a ground-breaking, hard hitting police series based on the Met’s Flying Squad set in 1970s London.

Even greater success was then to follow thanks to Thaw’s unforgettable portrayal of the cerebral, curmudgeonly Oxford-based Inspector Morse, a role he would occupy to huge acclaim for 15 years.

Away from the demands of work, John – who sadly passed away in 2002 at the age of just 60 - embarked a long and happy marriage with Sheila Hancock – an actress who has also enjoyed a hugely successful career of her own.

And, as Sheila reveals, Thaw's dramas weren’t solely confined to his searing embodiment of scriptwriter’s works of fiction.

HARD HITTING: John Thaw with Dennis Waterman, his co-star in The Sweeney

HARD HITTING: John Thaw with Dennis Waterman, his co-star in The Sweeney

For, fittingly in Manchester derby week, it was the battle for affection between City and United that was to cause ructions within the Thaw family when John was a teenager.

“City, of course, started 125 years ago right near when John was born in Gorton. So, both he and his family always had an obvious connection to the Club,” Sheila recalls.

“They were all devoted fans, but you have to take into consideration John’s father and brother Ray, both of whom were absolutely passionate City fans – particularly loving it when the Club were losing.

“Going back, City seemed to attract all sorts of fans who somehow loved the fact they were underdogs.

“But what happened with John was that when the Munich air disaster happened in 1958, I think he must have felt some kind of overwhelming regret about that and decided to go over to United.

READ: Which TV channel is City v United on

“It caused an appalling rift in his family because his father never forgave him.

“And then, whenever City played against United, that caused such uproar in the family. And I think John was always slightly sheepish after he started to follow United.

“Because it did seem a little bit of a betrayal of his roots in a way and, deep down, I think he was still also a fan of City to be honest.

“John’s father remained devoted to City – I loved watching him watch City as he was so aggressive! He was such a mild-mannered lovely man but was totally transformed whenever he watched City… he became possessed!

“I remember him growling whenever anyone scored against City!

“And watching a City match alongside John was always great fun. I think it was a terrible tear in his life and it was prompted by Munich which was deeply shocking when it happened. I think as a gesture he felt that they needed support as they had lost players.

“But, like I say as he grew older, he was fan of both given his allegiance to the area.

“I also think John would have loved to have seen how successful City have become as he liked success.”

The thriving, cosmopolitan Manchester of today is, of course, utterly transformed from the industrial, heavily polluted city that John grew up in.

And his formative years following City with his father and brother helped provide a welcome glint of sky-blue technicolour to an otherwise bleak, monochrome existence.

“It was a tough area back then, really tough, so the recreation of football was a massive release,” Sheila added.

“When he was younger with his brother sometimes Ray and John used to bunk into Maine Road to watch games.  I think they had some backway where they got in.

“They were on their own, so they ran wild and the team was quite important to them.  Ray as I say was so passionate about City and later on nearly came to blows with John.

“It’s interesting as the Gallagher boys from Oasis grew up on the same estate as John and they obviously ended up supporting City too.

“John got away sharpish from Manchester as he had a terrible childhood.

“In those days, Manchester was a dreary place. Going on tour you dreaded playing there but now I have two grandchildren who have been to the city’s University and it’s fabulous.

“It’s beautiful, trendy, thriving, artistic, cultured city now and I make any excuse I can to go along.

“Through work we would go there. John’s mother remained in Manchester and he met her once before she died, and his father lived in Marple later on in life so we would go there a great deal.

“And we still chuckle about Grandad, John and Ray at Christmas as they got very het up and angry about the football - that is a treasured family memory.” 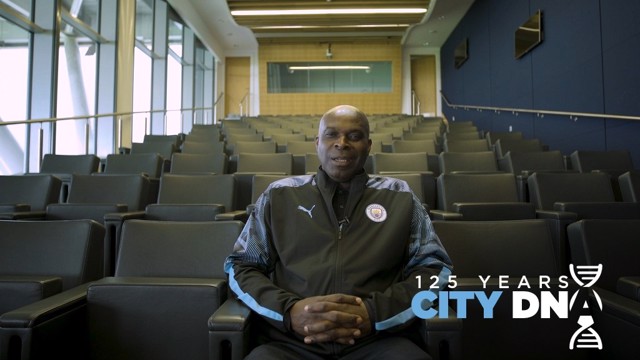 A passion for football continued to resonate with Sheila following John’s passing.

After becoming chancellor at Portsmouth University, she became an adopted Pompey fan – cheering the south coast club on to FA Cup glory in 2008.

And she believes there are common threads of passion and joy that help bind the worlds of football and the acting profession together.

“God knows we need something to bring people together in this country and football is so great as it helps achieve it,” Sheila added.

“I loved going to games with John and I do think it’s very much like the theatre… it’s a unifying force and that’s why Manchester is so great like that now with the Royal Exchange, the Bridgewater Hall and so on.

“There is nothing better than sitting with a group of people you don’t know bit you can feel all watching the same thing and the feelings it generates… it’s amazing and that’s what football can do too.”

It’s the game that gets City fans’ pulse racing more than any other.

How to win the last two Manchester Derby tickets...

Today, people around the world are taking part in charitable initiatives as part of Giving Tuesday

The inner workings of how Manchester City prepare and recover for matchdays has been explored in a new documentary in partnership with Gatorade.

A brand new documentary on how the Champions stay at their peak...