We’ve seen a mixed set of results for our loan stars this week, with a number of losses, draws and just three of our players experiencing a victory over the past seven days.

First up we start with our loanees in Holland, as five of our players featured in NAC Breda’s 1-0 loss to VVV-Venloduring their latest Eredivie clash.

Angelino, Manu Garcia and captain Pablo Mari all featured for the full 90 minutes, although the skipper was shown a yellow 10 minutes before full-time.

Paolo Fernandes also made an appearance when the 19-year-old Spaniard replaced Gianluca Nijholt in the 79th minute, while Thierry Ambrose came off for Bodi Brusselers. 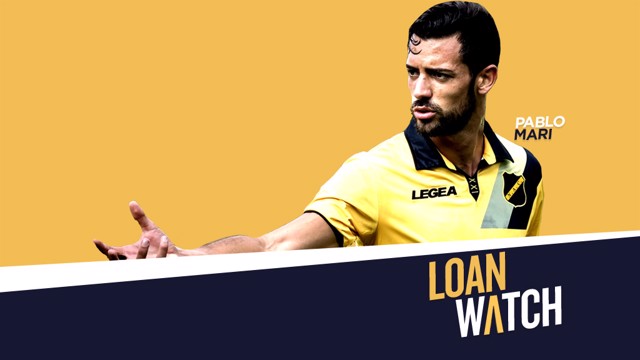 Elsewhere in Holland, Aaron Nemane made his third appearance for the Go Ahead Eagles following a loan move to the club earlier in the month.

His new side suffered a close-fought 4-3 defeat to FC Volendam, and the 20-year-old played for 73 minutes before being substituted for Brem Soumaoro.

Onto Spain now, as both Girona and Real Oviedo sealed goalless draws in their respective matches.

Aleix Garcia was on the bench for the duration of the game.

La Liga 2 side Real Oviedo’s match against Reus Deportiu ended in a goalless stalemate with loanee Yaw Yeboah featuring for a majority of the game before being replaced by Toche in the 72nd minute.

In Turkey, Jason Denayer was on the winning side during Galatasaray’s 2-0 victory over Osmanlispor – meaning Denayer’s side sit on 41 points at the summit of the SuperLig table.

In the Scottish Premier League, Brandon Barker experienced a win and a loss over the past week when Hibernian faced Dundee during midweek and Celtic later at the weekend.

Barker started both clashes, and although Hibs secured a 1-0 victory on Wednesday, Neil Lennon’s side were defeated by reigning Champions Celtic just days later.

South of the border, Isaac Buckley-Ricketts played his second game in an Oxford United jersey during his side’s quarter-final clash with Chelsea Under-23s in the Checktrade trophy.

Oxford suffered a 3-0 defeat to the academy team and won’t progress to the semi-finals.

Fellow League One side Oldham Athletic also saw a loss in their recent game and loanee, Kean Bryan, played the full game, but was unable to prevent the 2-1 defeat.

Rodney Kongolo was also in action in League One and started for Yorkshire side, Doncaster Rovers, as his side endured a 3-1 loss at the Keepmoat Stadium to visitors Bristol Rovers.

Moving on to the Championship now, where Angus Gunn impressed yet again for Norwich City when he kept a clean sheet during the Canaries’ 1-0 win away at Brentford. The 22-year-old’s recent appearance marked his 29th start in the Championship this season.

Finally we finish on the FA Cup, as Joe Hart skippered West Ham during their fourth round tie with 2012/13 winners Wigan.

The Hammers were unable to progress into the hat for the fifth round as Wigan put two past the London side, and the game finished 2-0.

That's all for now, but we will be back with the latest City loan news from around the world next week...

Which TV channel is Man City v West Brom on?

Your daily round-up of news, views, gossip and opinion...

In Pictures: Job done in Cardiff
Next Fixture All Fixtures