Aymeric Laporte is ready to be thrust straight into Premier League action after his arrival from Athletic Bilbao.

That’s the verdict of Pep Guardiola, though the Catalan admits he is unsure whether the necessary paperwork will be completed in time for his new signing to play against West Bromwich Albion on Wednesday.

Given the challenges of the Premier League, Guardiola has acknowledged the need for patience, but feels City have secured the services of a player capable of performing at the top level for years to come.

“I don’t know, [if Laporte will be available]” Pep told journalists ahead of the Baggies’ visit to the Etihad Stadium.

“I don’t think so, but in football anything can happen.

WATCH: Aymeric Laporte by the numbers

“He is ready. Of course, he has to adapt. The Premier League is special in many senses, but he is intelligent.

“It’s always tough for a new player but we will be patient.”

Laporte has developed a reputation as one of the finest young defenders in Europe and Guardiola is understandably delighted to add a player he feels is perfectly suited to excel in the exciting and youthful squad he has assembled.

And with more than 200 La Liga appearances to his name, the manager also revealed the Bilbao youth product’s big game experience was another significant factor in bringing him to Manchester.

“He’s a left footed central defender who has played since a young age in La Liga on the biggest stages,” reflected the boss.

“He’s strong in the air, good quality with the pass.

“He is experienced, fast and he has the skills we need.

“He is the perfect age, 23-years-old, so hopefully he will have a long career here at Manchester City.” 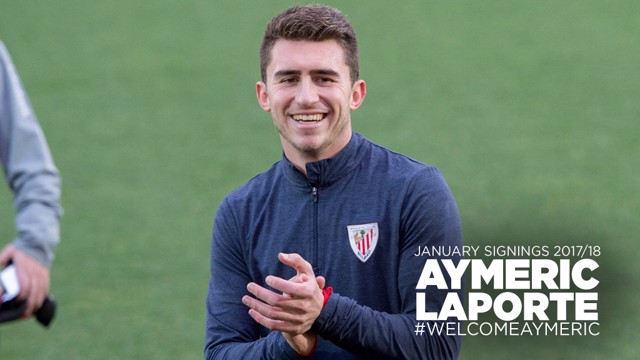 By the numbers: Aymeric Laporte

The benefits are not only confined to the pitch however, with Guardiola also admitting Laporte’s January arrival will provide a welcome relief come the summer transfer season.

“In that time [last summer] it was not possible. He decided to remain in Bilbao.

“We needed a central-defender in the summer time but we still have a lot of games to play, so we tried to bring him now.

“So, in summer, our transfer window will be easier.”

Pep Guardiola says he expects Leroy Sane to be out for “six or seven weeks”.