The match kicks off at 17:30 BST on Saturday 7 December at the Etihad Stadium.

The game will be broadcast live in the UK on Sky Sports, and you can also be across all the action as it unfolds thanks to our Matchday Centre on mancity.com or via Twitter: @ManCity.

City will be without long-tern absentees Leroy Sane and Aymeric Laporte.

Sergio Aguero is doubtful though Oleksandr Zinchenko has returned to training and Ilkay Gundogan is available after serving a one game suspension.

Forward Anthony Martial is back in contention to feature after recovering from an injury picked up last weekend against Aston Villa.

However, his France teammate Paul Pogba remains a doubt ahead of the derby.

"It's Man United. All the respect for what they have done in English, European and world football. They are a good team.

"Their history is huge and the quality of players they have has always been there.

"They are incredibly fast up front with Martial, (Daniel) James and (Marcus) Rashford. And set pieces with (Harry) Maguire, (they have) physicality, they are aggressive. I had a good impression when I saw them."

"We’re going away against arguably the best team in England, so of course it’s going to be a difficult game.

"Manchester derbies are always special games. We’re up for it, the fans are up for it."

A quickfire second half double from Bernardo Silva and Leroy Sane earned City a crucial and well deserved 2-0 win at Old Trafford back in April.

Silva's low effort struck in at the near post ten minutes after the break before Sane put some daylight between the sides with a powerful drive past David De Gea.

And if picking up local bragging rights was not enough, the three points also put us within nine points of retaining the Premier League title. 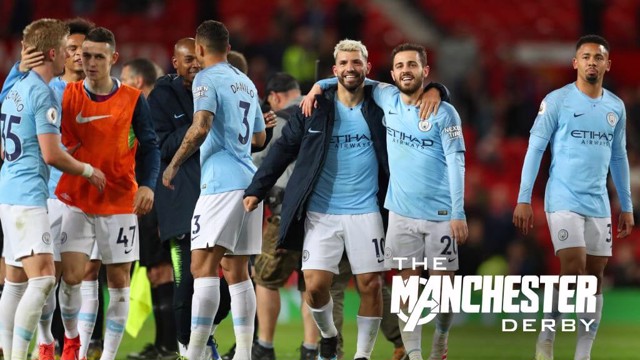 Ahead of Saturday’s 179th Manchester derby, Club journalist Neil Leigh spoke to leading sports psychologist, Professor Damian Hughes, to get his unique insight into why the game is so important to supporters.