The match kicks off at 8pm on Wednesday 6 November at the San Siro stadium in Milan, where Atalanta are playing all of their Champions League home games, due to their own ground not meeting UEFA requirements.

The game will be broadcast live on BT Sport in the UK, and you can also keep up to date with all the action in our matchday centre here on mancity.com or via Twitter: @ManCity.

Fans living outside the UK can use our global TV listings to find out how they can watch the game in their country.

David Silva is a doubt after picking up a muscle problem against Southampton, while Phil Foden is suspended after his dismissal for a second bookable offence during our 5-1 victory two weeks ago.

Striker, Duvan Zapata, is out with a muscle injury. Otherwise, Gian Piero Gasperini is expected to have a fully fit squad to choose from.

“We are going to play with the best team as possible against Atalanta and after at Anfield. Nobody can assure me that if we don’t do what we have to do at Atalanta, we are going to make a better performance against Liverpool.

“The best way to face Atalanta is to play the way we did against Southampton, with the victory. The best way to go to Anfield is to play a good game against Atalanta, who for the last three seasons, have been fighting with the top clubs in Italy.

“That is the point. They can score five or six goals every game. We are going to play with the best team we believe, considering regeneration and considering the opponents."

City came from a goal down to snatch a late 2-1 win over Southampton, with Sergio Aguero and Kyle Walker on the scoresheet. 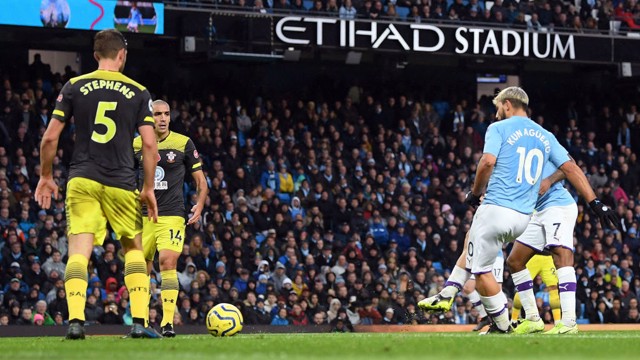 A Ruslan Malinovskyi penalty handed Atalanta an early lead at the Etihad, but City, inspired by Raheem Sterling, hit back to win 5-1.

Sterling provided an assist for Aguero’s equaliser and won the penalty the Argentine scored to put us ahead and then went on to score a hat-trick himself.

Monday marker: Your guide to City's week ahead

Houghton and Kompany goals up for award

Pep Guardiola says that David Silva is not expected to be fit for Wednesday’s Champions League trip to Atalanta along with next Sunday’s Premier League assignment away at leaders Liverpool.

What TV channel is Atalanta v City on?

Manchester City return to Champions League action this week when we take on Atalanta.

Find out where you can watch Atalanta v City, wherever you are in the world...