Here's everything you need to know ahead of City's trip to St James' Park.

It will be broadcast live on BT Sport in the UK, and you can also follow all the action via our Matchday Centre on mancity.com or on Twitter: @ManCity.

You can also catch the game in full within 24 hours of the final whistle thanks to Man City for TV.

Fans outside the UK can find out where they can watch the game in their country via our global TV listings.

Sergio Aguero will miss the game due the thigh injury he picked up against Chelsea, joining the long-term injured trio of Aymeric Laporte, Leroy Sane and Oleksandr Zinchenko on the sideline.

"(It is) tough with a new manager but they have had good results. I think they will stay in Premier League. They are physically strong and fast upfront."

"We'll have to defend well and take our chances, but we've done OK against some of the big teams this season. Let's hope we can again."

City come into the game on the back of a 1-1 draw against Shakhtar Donetsk, which sealed our progression to the last 16 of the competition.

Newcastle where last in action on Monday evening, losing 2-0 away at Aston Villa which leaves the Magpies 14th in the Premier League table.

A late Matt Ritchie penalty saw us lose 2-1 at St James' Park back in January.

We started in the best possible fashion, Aguero hooking home after 24 seconds, but the hosts fought back in the second half to claim the three points.

Although this was a disappointing night for Guardiola's men, it proved to be the catalyst for their incredible 14-game winning run to the Premier League title. 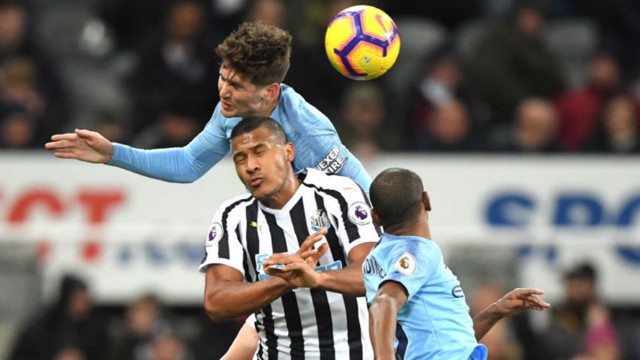 Which TV channel is Newcastle v City on?

Rodri says City must leave St James’ Park with three points on Saturday – but is expecting a stiff battle against Newcastle United.

Pep: 'Managing these players is a dream come true'

The Blues boss, speaking ahead of Saturday’s trip to Newcastle, responded to a question of whether he imagined he would settle so well into Manchester life.

More from the boss ahead of Saturday's trip to Newcastle...

Gallery: Having the Tyne of their lives!
Next Fixture All Fixtures