City were back to their breath-taking best as Burnley were swept aside at Turf Moor.

Dominating from start to finish, the champions took a first-half lead through Gabriel Jesus before adding further goals from Jesus, Rodri and Riyad Mahrez to complete a hugely impressive 4-1 win against the Clarets.

It was exactly the fillip Pep Guardiola’s side needed after a testing few weeks.

City began as they meant to go on, looking sharp and incisive from the word go.

The Blues looked much more like the team that swept all before them last season as they dominated Burnley all over the pitch.

The only surprise was that the opening goal didn’t arrive until the 24th minute – but when it did, it was a beauty.

There were initial fears for Kevin De Bruyne who went down under a heavy challenge on the halfway line in the build-up, but as play continued, David Silva found Gabriel Jesus on the left of the Clarets’ box and the Brazilian cut inside one challenge before curling a beauty past Nick Pope from 18 yards.

It was the striker’s first goal in 11 games for club and country and just the tonic he – and City - needed.

The Clarets had goalkeeper Pope to thank on a number of occasions, but his extraordinary save on 32 undoubtedly kept the hosts in the game as De Bruyne’s cross found Raheem Sterling who looked set to tap home from a couple of yards, but Pope kept the ball out with his trailing leg.

And two minutes before half-time, Pope again produced an unorthodox save as he volleyed Bernardo’s goal-bound shot clear.

City continued to dominate after the restart and it seemed like a matter of time before the lead was doubled – five minutes, in fact – and it was another cracker. 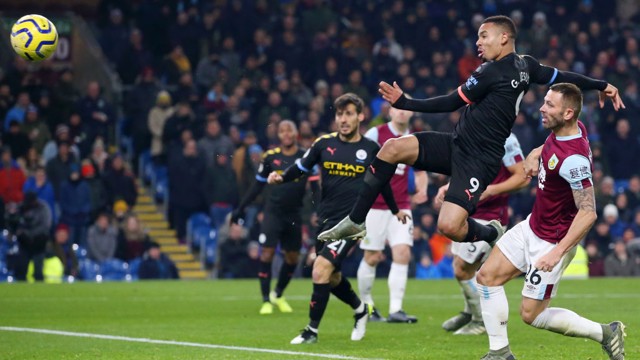 David Silva was again involved after the ball had been strolled around by the Blues and eventually found its way to Bernardo whose pinpoint cross was expertly guided home by Jesus into the top left-hand corner.

It was vintage City.

And Jesus was unlucky not to complete his hat-trick just minutes later after completely outwitting James Tarkowski in the box before curling the ball inches wide.

The travelling Blue Army were celebrating yet another wonder-strike on 68 minutes as the champions went 3-0 up.

David Silva saw his effort blocked on the edge of the box but following up was the magnificent Rodri who struck a thunderbolt into the roof of the net from 20 yards – nothing less than his performance deserved.

Riyad Mahrez added a fourth with a low shot past Pope from 18 yards, before Robbie Brady pulled a consolation goal back shortly after

On a rainy night at Turf Moor, Rodri showed exactly what he can do for the Blues.

The Spaniard was magnificent in the first-half, winning almost all his duels, mopping up loose balls and intercepting high up the pitch continually.

He also sprayed passes around the pitch to great effect and ensured the Clarets weren’t allowed to build too many attacks in an impressive display of midfield anchorage.

This was a performance and result City badly needed.

As pundits and journalists write the champions’ title hopes off, what better time to turn in a display that oozed with confidence and polish?

Every player contributed and so great was City’s dominance, a victory of double the eventual score wouldn’t have flattered the Blues.

Sometimes, one game can spark something special – let’s hope that’s the case here, though the really hard work lies in the months ahead.

Despite two sublime finishes from Gabriel Jesus, Rodri’s overall performance – his best in a City shirt – just edges out his Brazilian team-mate.

Rodri: 'We want to show everyone the best of City': Rodri says his performance against Burnley was somewhere near the level he wants to play at every game for City.

Tuesday, December 3, 2019 11:21 PM
Rodri: 'We want to show everyone the best of City': Rodri says his performance against Burnley was somewhere near the level he wants to play at every game for City.

City move ahead of Leicester into second place in the Premier League and eight points behind leaders Liverpool – both of whom play on Wednesday evening.

“They were really good goals.

“The first one was excellent and the second one was the result of an incredible cross and great finish. Riyad and Rodri’s goals, too. 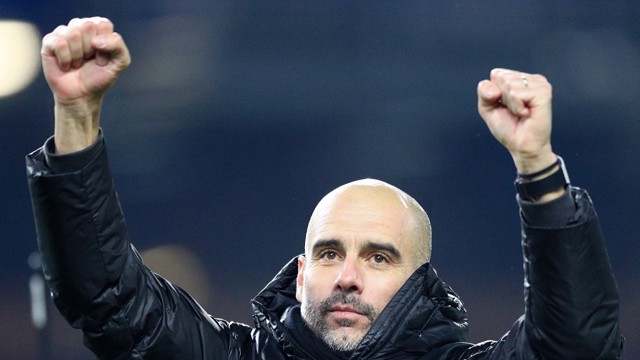 Pep: 'We will move forward, game by game'

“We need Gabriel Jesus. The strikers are there to score goals. We need him.

His effort and commitment is always there. He’s very important for us.

“It is not easy to replace Sergio, but the team doesn’t have doubts about him."

Next up it's Manchester United at the Etihad Stadium, kick-off 5.30pm.

Then it's off to face Dinamo Zagreb in the final Champions League group stage fixture.

February TV selections to be made after UCL draw

The November Etihad Player of the Month vote is now open.

Vote now for your November Player of the Month...