You sink or you swim – and in some case, you even make waves. When teenage goalkeeper Ellie Roebuck was unexpectedly launched into action when City faced Chelsea on the first day of February 2018, she certainly made a splash.

Aged just 18, the shot-stopper had already made her City debut in both domestic and European competition – but this frantic fixture marked the day she truly arrived on the big stage.

Introduced from the bench with just three minutes gone, due to a serious injury to Karen Bardsley, Roebuck entered the fray, preparing to battle the rising tide – and what would prove to be a raging sea of Chelsea pressure.

To make matters worse, captain and centre-back Steph Houghton – City’s stoic and ever-reliable leader; the steerer of the ship – would also be lost to injury. The odds looked stacked against the visitors; the chances of returning to Manchester with a positive result highly unlikely.

However, up stepped Roebuck. The teenage shot-stopper produced a superb performance, showing talent and a maturity beyond her years to preserve a precious point, thwarting wave after wave of Chelsea attack with some excellent saves and a resolute command of her area.

Most notably, she denied Drew Spence a late winner with a remarkable stop with her well-placed, outstretched foot with the goal at the forward’s mercy, earning deserved acclaim and rave reviews for her display.

Izzy Christiansen was particularly complimentary, stating bluntly in her post-match interview: “If it wasn’t for Ellie, I think we’d be walking away with no points.

“She was absolutely fantastic. She came off the bench early on in the game and played like an absolute pro.”

The secret to Roebuck’s success? Fearlessness.

“I’ve just been told to do what I can and play with no fear,” she explained. “That’s one of the main lessons I’ve taken.

“I know I’m young and I know there’s a chance I’ll make mistakes but I just have to make sure I try to limit them and then if I do make a mistake, that I learn from it.

“Although people see my job as a high-pressure job, a lot of people would say I’m quite a chilled person, which I think fits in with my role really nicely. I don’t let things get on top of me. I’m very laid-back but I know it’s the best way.

“Being in the environment at City, it’s really professional and you learn. You have to hold your own and take care of yourself.

“I just want to keep on learning.”

Naturally, Roebuck’s magic moment was shared across social media; later acknowledged in the league’s End of Season Awards – nominated in the Save of the Season category alongside her mentor Bardsley’s splendid fingertip stop to deny Arsenal star Jordan Nobbs.

Further recognition would follow with an inclusion in the Northwest Football Awards’ Rising Star shortlist, before the youngster clinched the same award in the Club’s own accolades.

Then came her proudest moment to date: her senior England debut.

Having enjoyed glory on the international stage by aiding the Under-20s side to bronze medal success at the 2018 World Cup in France – and who knew she would return a year later with Phil Neville’s first-team to experience her first senior major tournament?

Her first call-up to the Lionesses squad arrived in the latter stages of 2018 – since then, she has flourished for both Club and county, making her debut in November 2018, after being invited to a series of training camps and the SheBelieves Cup tournament in March. 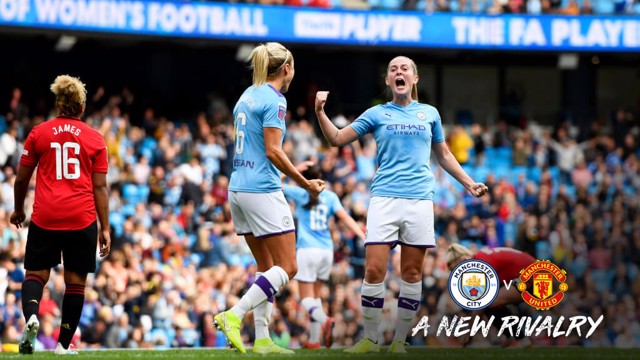 Fast forward 12 months and she is now pushing for a starting place for her country, continuing to shine at Club level with a string of impressive performances as Nick Cushing’s first-choice goalkeeper in the injured Bardsley’s absence.

Following her equally eye-catching display in the record-smashing first professional Manchester Derby at the Etihad Stadium in September, the manager hailed his ‘keeper’s contribution, declaring that Ellie ‘deserved a pat on the aback for keeping us in the game.’

A calming influence, composed in possession and cool under pressure in addition to her shot-stopping abilities, Roebuck’s style matches the City philosophy perfectly. She credits her attributes to her Sheffield upbringing – and she certainly possesses plenty of steel.

Touted as one of the brightest young talents in the English game and having already played her part in helping City to five trophies since her arrival as a teenager from her beloved Sheffield United’s Centre of Excellence, there is no limit to what the 20-year-old can achieve in her career domestically and internationally – and she rightly holds the highest standards for herself.

“In terms of my career path, of course, I want to win – the World Cup, the Champions League, the Euros, Olympic Gold… I always set my sights high. City are a big Club with very good players and that should be our main focus.”

Perhaps one day, there will be a splash of gold paint onto a postbox in Sheffield…

View CityNow - all our social media in one place
Coombs: Tough test perfect preparation for Chelsea

Gemma Bonner scored against her former club to give City a hard-fought 1-0 win over a stubborn Liverpool side at the Academy Stadium.

Find out how it all unfolded at the Academy Stadium.