Nick Cushing's side have the best goal difference and face leaders Chelsea in a fortnight’s time with the games between the top three already threatening to be pivotal in the title race.

“It’s probably the most competitive FA Women’s Super League there has ever been which is really exciting for us and the fans,” said White.

“We just need to focus on ourselves, work hard in training and take that into every game we play.”

White was on target in Sunday’s 5-0 win over Bristol City Women and looked sharp and fit after an injury lay-off delayed her start to City life.

“I feel really good – it was quite long process to get back to fitness and everything had to be right and perfect, but I’m fine now and I’m really pleased to be back,” she said.

“I love scoring goals and to be part of this Manchester City team feels amazing.

“I’ve done alright since I’ve returned, it could be better – I’m always super-critical of myself – but I’m just loving playing for Manchester City and I really love this club, and everyone connected to it.”

White admitted City were keen to beat Bristol side that had held the Cup double winners to two costly draws last season.

City went in at the break with just Tessa Wullaert’s goal to show for their efforts, before adding four more in the second half. 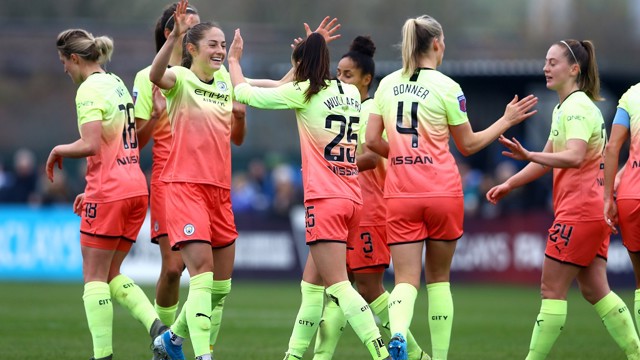 “We were keen to put that stat to bed and we spoke about it a lot this week!” said White in reference to last season’s two shut-outs.

“It’s been tough week for us with three games in eight days, but we’ve played well, won our matches and scored a lot of goals, so it’s been good.

“It was another professional performance. We scored five goals, dominated possession and kept a clean sheet so we’re really pleased with the result and get the three points.

“We had enough chances in the first to have put the game to bed, but we kept t it and the game started to open up after the break and we were more clinical when the chances presented themselves, especially in the last 25 minutes.

“We just wanted to put on good performance, take the three points home and then focus on the next game.”

City are back in action with the visit of Liverpool in the FA Women's Super League on Sunday 1 December (2pm). Tickets are available online or at the Etihad Stadium Ticket Office.

Janine Beckie says City’s upturn in fortunes is credit to the hard work Nick Cushing’s side are putting in on the training pitch.

The Cup double winners clinched a fourth successive win – and second consecutive 5-0 league victory – with a superb display on Sunday against Bristol.

City made it 14 goals in three games as Bristol City Women were swept aside at Stoke Gifford.

The midfielder has returned from a two-month injury layoff.