Nick Cushing emphasised the importance of every single point in City’s quest for the FA Women’s Super League title.

The 2016 Champions currently sit just one point behind league leaders Chelsea, having finished as runners-up to Arsenal in the 2018/19 campaign.

While many expect the title race to be decided on head-to-heads between the current top three, Cushing asserts every fixture carries the same significance for City.

White relishing thrilling title race: Ellen White says this year’s FA Women’s Super League is shaping up to be the best ever.

“It’s really important that we build momentum,” he said. “Head-to-heads will play a huge part but so will those games around the head-to-heads.

“We have to make sure we’re not dropping any points, putting those three points on the board when we’re facing teams who make the game difficult for us.

“It’s really tight at the top and it was always going to be with ourselves, Chelsea and Arsenal pushing to win the league, United wanting to be up there and Everton doing really well.

“The league is super competitive and we have to make sure we’re winning games we’d drawn previously.

“Last year, we drew against Bristol and that ultimately stopped us from winning the league. 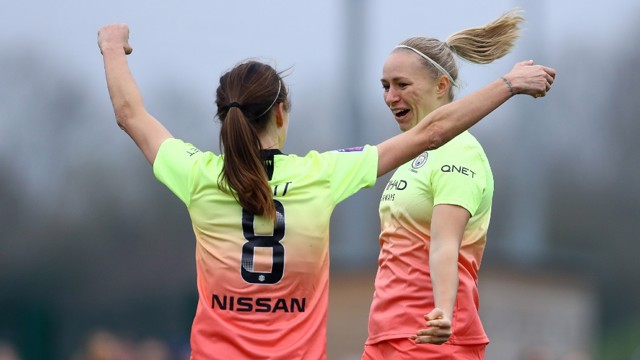 “I’m pleased that the team have showed hunger and desire to – not only win games but – win games well.

“To have won 5-0 last weekend was pleasing and to have kept another clean sheet was important.”

In contrast, Liverpool have endured a difficult start to the 2019/20 season, currently sitting bottom of the table with a solitary point on the board from seven games.

However, Cushing warned against complacency, anticipating a valiant effort from the 2013 and 2014 title winners.

“Liverpool will want points,” he stated. “They’ve not had as many this season so they’ll be desperate to get more.

“A draw or win for them will be their aim. We’ll have to put in the same performance we put in against Bristol and West Ham.”

Tickets for all City home games are available online or at the Etihad Stadium Ticket Office.

View CityNow - all our social media in one place
Gallery: Limbering up for Liverpool
Fit again Coombs reinvigorated after injury

Laura Coombs says injury has given her a renewed focus as she prepares to face former club Liverpool this weekend.

City face the Merseyside outfit at 2pm on Sunday 29 November at the Academy Stadium.